Feel free to add a link to this site, but please don't copy or repost any of the material that appears here without first obtaining my permission.

©  Ginni Swanton 2017 except where otherwise noted. All rights reserved.

Years ago, I scanned one of my great aunt Mary (Swanton) Pinkham's photo albums. I set the photos to music and identified some of the people in them. Peg Michie lived at 51 Dix Street and Auntie Mary lived at 42 Dix Street, and they were best friends.Peg died young in 1944. They both attended Boston University and became bookkeepers. Auntie Mary identified one of the men in the photos as "Jimmy". She said she would never consider marrying him because, like her father, he drank too much.

This is a photo tribute for my father, William Bernard Swanton, who passed away on October 21, 2016 at the age of 95.

I've been editing some of my old family videos from the late 1950's to the 1990's and adding sound to them. They're a window into a distant past-- a world that no longer exists, except in memory. I hope you enjoy them.

"On June 15, 1929, with Dr. John G. Cullinan, Reverend Thomas J. Hill and Father Healy by his side, William Swanton signed his name for the very last time. I wasn't there, of course, but I can imagine him raising his pen with an age-spotted, quivering hand to the document presented to him on his deathbed. This document would affect the lives of many people for many years to come. William's story, however, begins 74 years earlier in rural County Cork, Ireland."

This book chronicles the lives of William Swanton, my great grand uncle, who was the son of Michael and Elizabeth (Bradfield) Swanton, and his wife, Anne (O'Neil) Swanton. They were born in neighboring townlands in rural County Cork and immigrated to Boston where they lived until the 1920s. William Swanton was a larger-than-life figure who cut a wide swath as he charged through life. Accounts of rural country life, chain immigration, women's rights, upward mobility in a new country, venereal disease, marital separation and insanity all provide a fascinating glimpse into the past. The appendix of this book contains copies of original genealogical records, newspaper articles, photographs and numerous Family Group Sheets.

I wrote this book as my final project for a 9-month certification course for Genealogy and Family History that I completed in June at the University of Washington.


By the Bridge: A Tale of West Cork and Boston

The Bradfield Home at Tullyglass

by Sean O'Casey, Mullingar
This information was written in the early 1950's and was provided
by Cliff. Johnston, whose wife's maiden name was Casey.
This manuscript was found amongst her family's memorabilia.
You can contact Cliff. by clicking here.
On February 14, 2010, Peter Murphy provided the following information about this manuscript:

"The original manuscript was mailed to my late father, Michael Murphy, by his sister Lizanne in the early 1950's.
She was the postmistress in Buttevant, Co. Cork at that time.
The appended notes were written by my father in 1964 and there are a couple of notes of my own."
You can contact Peter clicking here.

This letter to the editor mentions the Kinneigh Round Tower in Cork and some of the legends of the area. It was published in the West Cork Eagle on July 18, 1868.

During a trip to New York City, I found two Swanton wills in the Manhattan Surrogate Courthouse which were written in 1798 and 1835. The testators, Ellinor and Robert Swanton, also resided in Cork, Ireland.

These wills contain a wealth of information regarding Swanton relationships (fathers, sisters, brothers, nephews, nieces, cousins, etc.) and their property ownership, both in the United States and in Cork, Ireland. Ellinor Swanton may have been Robert Swanton's aunt. I've linked Robert's will to some interesting biographical information about Robert, including his involvement with the United Irishmen in 1798 and his escape to America. There is also extensive information about Robert's nephew, Thomas Swanton, a noted Gaelic scholar and outspoken patriot. 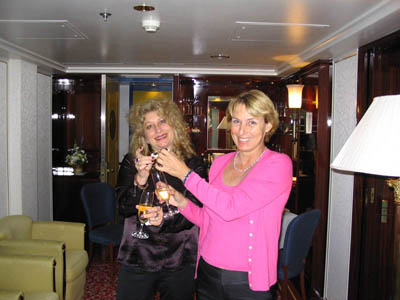 I've always loved music and singing, and finally decided to convert some of the songs I've recorded over the years to mp3 files and put them on my web site.